Today, people in Madagascar are dying from plague.
There is also some plague in the United States.

Plague is a deadly bacteria that is carried by fleas.
The word 'plague' can also mean 'harass' or 'cause trouble'.

Australia does not have plague but it has other infections
and unhealthy war spending which leads to agony and death. 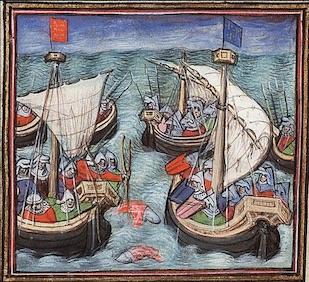 Back in 1348, England (with the red flag) and France wasted
tax money to fight the 'Hundred Years War'. 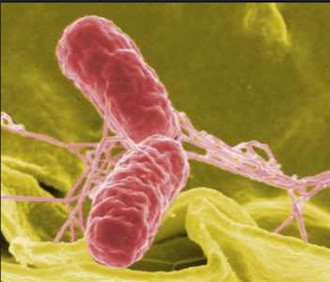 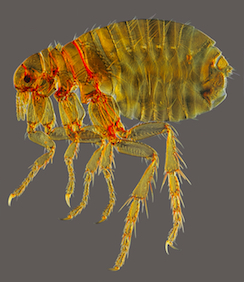 Yersinia pestis bacteria lives in the gut of fleas like this. 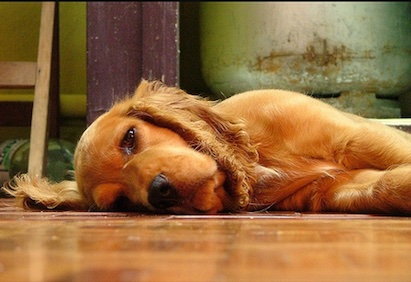 Fleas live on dogs and humans and many other animals... 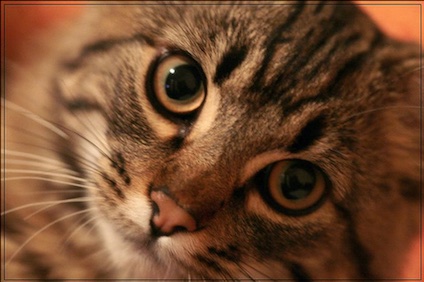 such as cats, rats and mice. 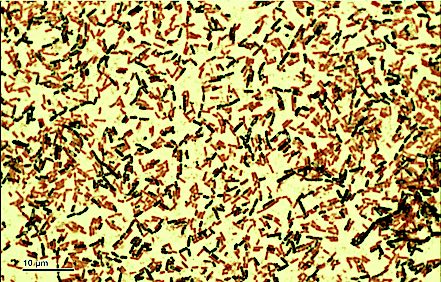 When the cat or dog flea (containing plague bacteria) bites a
person, or its flea poo drifts in the air near people, the plague
bacteria gets into the human bloodstream or lungs and causes
deadly infections. 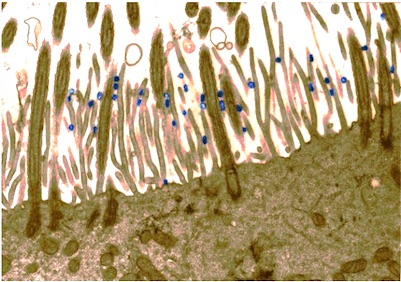 Luckily, people have a lymph or lymphatic system that grows
white blood cells and antibodies. 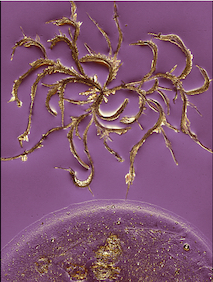 A human antibody (on top) fights a dangerous bacteria cell.

These white blood cells and antibodies try to fight the
plague bacteria.

But if people have a poor diet or are unfit or unhealthy, then
their white blood cells may not be able to fight and defeat
the plague bacteria or other infections. 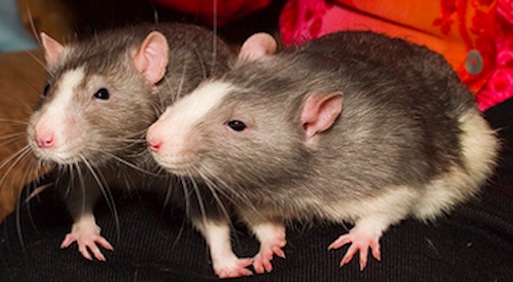 Plague bacteria have lived in the guts of fleas (which live
on rats, cats and dogs) for tens of thousands if not millions of
years. Early city people in Iraq and Egypt 3,600 years ago
came in contact with plague and wrote about it.

When ancient governments wasted money on wars and
did not care for their prisoners of war, many of the
POWs spread fleas and disease. Many ancient city
people (some who caused the wars) were killed by flea
bacteria. Historians in Iraq recorded these plagues 3,600
years ago.

Outside the world's first cities, many people died of plague
in ancient rural areas like Britain but ancient rural people
did not write about these deaths because they were illiterate.

Plague flared up in Asia and Europe many times before 1348.
What was special about the 1348 plague was that it was
a catastrophe that killed about half the English population
and it killed much of Europe and Asia's population.

By 1348, a few English people were literate (like the
ancient Iraqis) and so they recorded their Black Death
catastrophe. 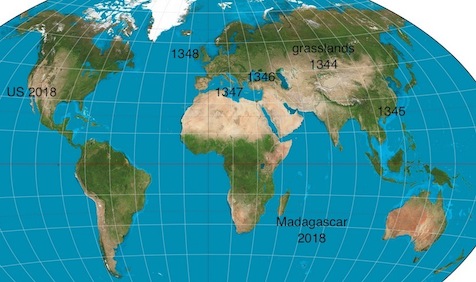 Between 1345 and 1348, plague spread from the grasslands
steppes in the middle of Asia and Europe. The Eurasian
grassland was a trade route where rats and people (with
their fleas) often travelled east to China and West to
Western Europe and England.

In 1345 people in Chinese cities started dying in large numbers
from the plague bacteria. A year later, in 1346, people died
in port towns on the Black Sea. From there, sailors shipped
plague into the Mediterranean Sea during 1347. By 1348,
hundreds of people were dying of plague every day in Italy. 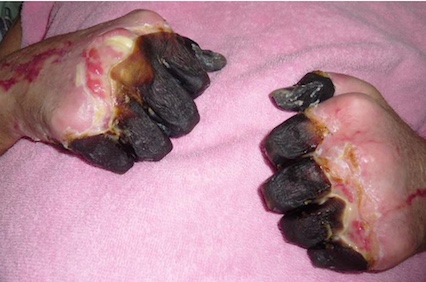 England was not a healthy place in 1348. The English government
consisted of King Edward III, his military officers, the Catholic Church
and wealthy landlords. These government people took money,
food and young men away from poor families to pay for rich
people's luxuries, bureaucracies, industries, trade and wars
with other European governments.

This heavy taxation, tything, conscription, war, rent and debt made
many families in England poor and unhealthy, with bad diets and
filthy living conditions. 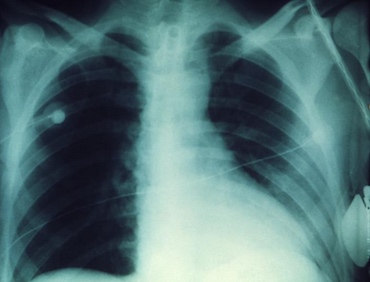 The deadliest plague bacteria attack is breathed in.

Most people lived with their farm animals (and fleas) inside their
houses, with dirt on the floor and mud plastered walls. Human
sewerage, factory poisons and dead animals were dumped
in the mud outside homes and businesses. The English government
knew this sewerage was dangerous but the rich or foolish
preferred to spend tax money and labour on wars and luxuries
rather than allowing people to build healthy lives for themselves.

Sailors, rats, fleas (and the fleas' plague bacteria) came to
the port town of Melcombe in 1348. They brought a strong infection
of the plague bacteria to unhealthy England. England's crowded
capital London was smaller than Hobart today: about 100,000 people
living alongside their rats and sewerage. In the next few years,
half the people of England died horribly from the plague bacteria
brought into their homes, food and beds by their animals and their fleas. 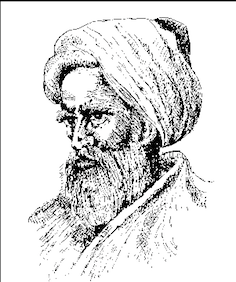 Most people of England (and Europe) ignored the development of
optics and lenses by Moslem scientists such as Alhazen (also called
Ibn Al-Haytham). Alhazen lived from 965 to 1040. 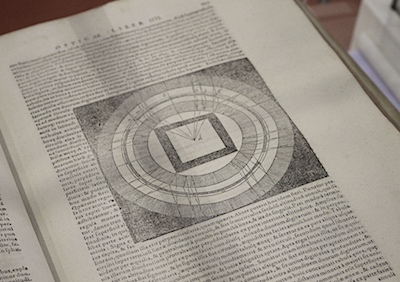 Alhazen did experiments and wrote the basic science of optics and
lenses. 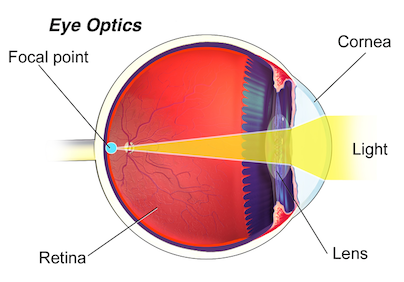 Because the English did not study Alhazen's science in the 1000s,
1200s or 1300s, they did not know how to build microscopes and
look closely at fleas or bacteria.

Without science and microscopes, they could not see bacteria
and so they did not know that plague bacteria was real and
infecting their bodies.

Most 1300s scholars and rulers didn't explore scientific medicine.
Without scientists to discover antibiotic drugs that fight plague,
plague victims could not be cured for another 550 years. 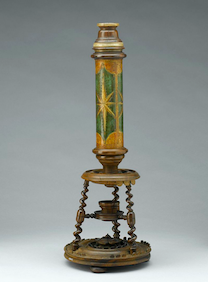 The microscope was only invented in Holland in the 1590s, 250 years
after the Black Death.

Even after inventing the microscope, it was another three hundred
years to 1894, before Swiss scientist Alexandre Yersin looked at
fresh human plague pus under a microscope in Hong Kong China.

Yersin saw live plague bacteria for the first time in the universe.

So people in England in 1348 did not know what bacteria was. They
did not pay scientists to find out the truth. In fact, the English put their
money into more wars, such as their wars with China in the 1800s. War
and civil war ruined China and caused epidemics, such as the
plague pus Alexandre Yersin saw through a microscope in 1894.

Not knowing science, when half the people of 1348 England developed
plague infections and died in agony, the frightened and ignorant people
who survived invented false reasons for the Black Death. Survivors
ignored science and truth, and spoke dishonestly. 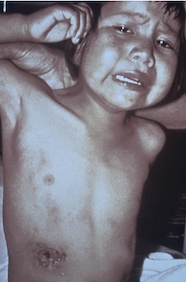 Many people invented religious or superstitious reasons. Many gossiped,
slandered, harmed or murdered innocent people. So many workers died
that the survivors could shop around for higher wages and choose where
to work.

Plague did not go away completely, even after half of England watched the
other half (their friends and family) all die of blood, lymph and lung
infections.

Survivors kept inventing fantasy reasons for the disease. With foolish
beliefs, they spent money and manpower on more wasteful wars and
they kept living close to their animals in dirty homes.

Today many people who keep furry pets or farm animals still cause plagues
and epidemics. How so? The owners regularly apply antibiotics, flea
or other frequent medicines to their pets. The feed pets with other animals
treatments (such as beef cows, farm fish, lamb and chicken) that have
consumed antibiotics.

Regular use of medicines on pet and farm animals destroys the power of
the medicines. The plague and other bacteria build up resistance to
to the flea treatment chemicals and antibiotics. So the bacteria
evolve into superbugs.

Now when seriously injured or sick people go to hospital, they may bring
or catch a superbug. Because our antibiotics and other treatments have
been used up on pet and farm animals, sometimes health workers cannot
cure sick and injured people, and people die from the evolved bacteria.

The best place to see and hear animals is in a park, on an organic farm,
a wilderness park or in the wild (including the sea). Then we can
enjoy animals without destroying people's health and our health system.

Of course a few people are blind or disabled, or need an animal for their
work. And people who care for a pet should continue to do so, but they
should understand how they may ruin human health. And when it comes time
to replace a pet, spend the pet money on supporting a wildlife sanctuary
instead.

As a supporter of wildlife sanctuaries, you will 'own' hundreds of
wild pets which you can visit any time or watch on documentaries. You
will save the health system for emergencies when you seriously need an
antibiotic or other precious medicine.

Talk to other pet owners to help them understand how people cause
plagues, infections and how over-use of antibiotics is evolving the
super-bacteria that kill people today.

Farmers who want to protect our health system use organic farm methods
rather than threaten antibiotics and human medicines.

Back in 1348, people were ignorant of science, and half died from plague
bacteria. The plague changed all the survivors' social status. Before,
most people were serfs (similar to slaves) who worked for land owners.
Serfs believed they had to obey the owner and fight in the king's wars.

The epidemic both ruined people's bodies and people's relationships.
Everyone's social status changed. After 1348, the king (and other war
makers who survived the plague) improved their social status by running
their wars as a business. The captured wealthy prisoners of war and
sold them back to their families or estates.

Because governments spent money on wars instead of health, further plagues
broke out for the next six hundred years. In 1665 and 1666, Cambridge
University was closed because of plague. The young scientist Isaac Newton
left university and studied optics at home. He discovered many laws of
physics which we still use today.

Today, our climate is destroyed daily by people who pollute the air with
carbon gases from cars, factories, animal farms and wars. This climate
destruction may possibly bring back the bubonic plague and other
catastrophic infections. The old human diseases are frozen in the ice
in Alaska, Siberia and Antarctica. As our carbon pollution melts this
ice, scientists are findingthe deadly old diseases exposed in today's
melted water. 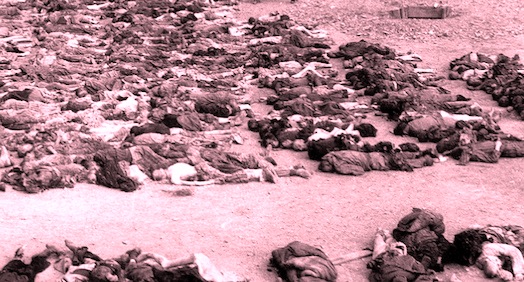 Today most war investors, leaders and lower ranks kill mainly children
and families, not other killers. Lives are wasted instead of helped.

Today, a 'plague' of fruit flies infects Tasmanian agriculture. This means
less food, work and money for Tasmanian people who have spent their taxes
on wars.
Such economic ruin decreases people's health too.

Because we waste money on wars (as Edward III did) we do not care
properly for old people. Last winter, many old people died of flu
virus infections in Tasmanian nursing homes. And on the west coast,
the Tasmanian government has allowed fish farm money-lenders to fill
Macquarie Harbour with bacteria and kill about a million fish.

Now the government is stealing away public waterways and secretly
giving them to the same fish sewerage bankers. Tasmania has a long
history of poisoning itself and not learning from history. The
Cascade Brewery and other factories destroyed early Hobart's water
supply rivulet. And metals investors poisoned Hobart's Derwent River.
Some Derwent fish are still poisoned today.

12 October 2017 by Dorian Geiger:
Madagascar: Why is there a plague outbreak in Antananarivo? 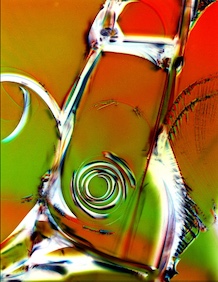 Good governments stop wars and spend taxes instead on health and
life science, such as this microscopic crystal of antibiotic, which saves
people's lives.


AUTHOR REFERENCE FOR THIS ESSAY:


Bala, Arun. 2008. The Dialogue of Civilizations in the Birth of Modern Science. US: Palgrave Macmillan.

All photos are in the public domain or used under Creative Commons Licenses.

You are free to use the photos if you also credit their owners like so:

Bacteria, similar in shape to Plague. (Salmonella). US Government.

Dog and Cat: http://animalphotos.info/ with creativecommons.org/licenses/by/4.0